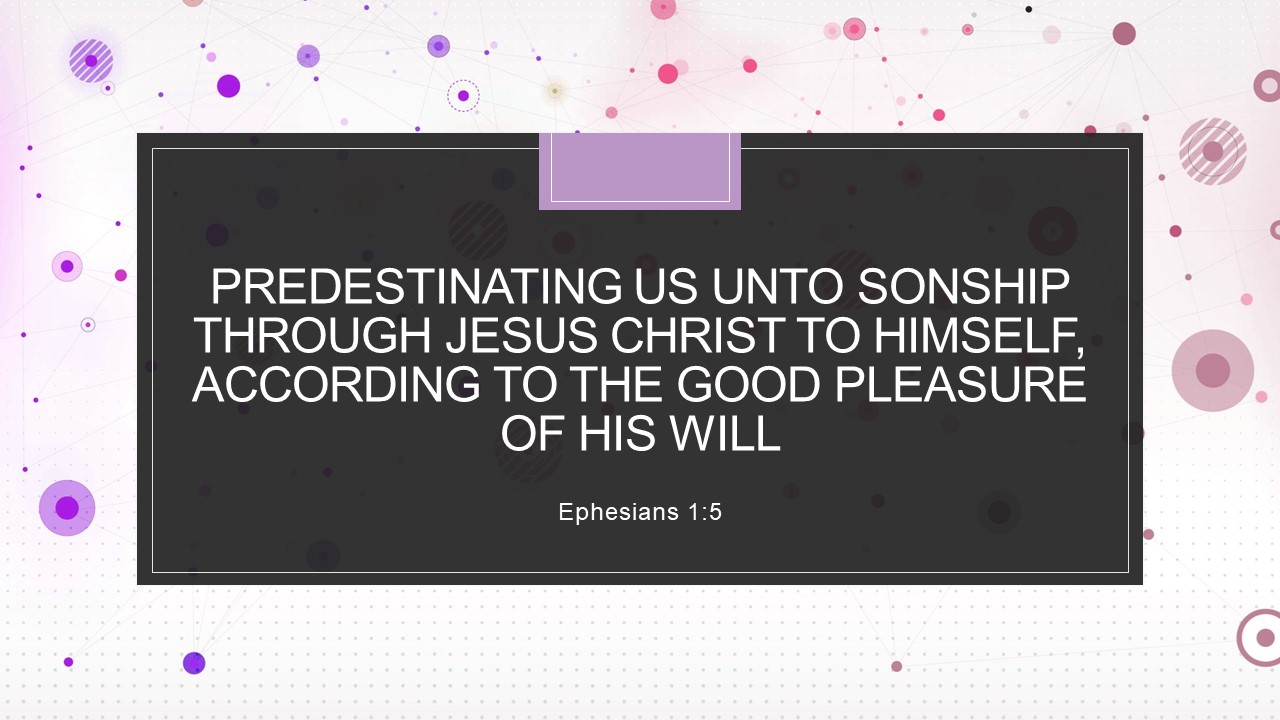 Ephesians 1:5 Predestinating us unto sonship through Jesus Christ to Himself, according to the good pleasure of His will,

Romans 8:29 Because those whom He foreknew, He also predestinated to be conformed to the image of His Son, that He might be the Firstborn among many brothers;

God knows all things, the past, the present, and the future. He is the source and initiator. Therefore, before you and I were born, He knew us. Not only so, but He looked at all those whom He would create and marked them for a certain destiny. This was His predestinating us as is mentioned in Ephesians 1:5. In his translation of the Bible, John Nelson Darby used the words “having marked out”. In fact, God marked us out for something really special, to be His many sons (Ephesians 1:5) and to be conformed to the image of His Son Jesus Christ (Romans 8:29). You might ask yourself, “why did He do such a thing, and why did He choose Me?” The same verse tells us that He did it according to the good pleasure of His will. This just says that God likes you.
The verse prior, Ephesians 1:4 says, “Even as He chose us in Him before the foundation of the world to be holy and without blemish before Him in love”. Therefore, we’ve been chosen and predestinated. No one knows why He chooses one over another, but we can say that there is something in His heart for you.

The following story about D.L. Moody really helps to make this point clear.

D. L. Moody encouraged his seminary students to preach the gospel. A student, who heard Moody’s teaching on predestination in class, was impressed and did not dare to preach the gospel, because he had a problem. He said to Moody, “I dare not preach the gospel now.” Moody asked him why, and he said, “When I am preaching, I look at a person and consider whether he is predestinated; I look at another and consider whether he is chosen. If God has not chosen and predestinated these ones, and they are eventually persuaded by me to believe in the Lord, will I not be making a big mistake?” Moody then replied, “Brother, just do your best to persuade him. As long as you can persuade someone to believe in the Lord, he has been chosen and predestinated by God.” Then Moody went on to say, “At the entrance of heaven, the words whoever will may come are written on the outside; this means that whoever believes can be saved. But once a person passes through the entrance and looks back, he will see written on the inside, ‘You have been predestinated.’ Outside of the entrance is whoever, but inside of the gate is predestinated.” Thus, when leading those who have passed through the entrance and have been baptized, we should say, “You have been predestinated by God. You believed in the Lord and were saved because God picked you out and marked you out a long time ago.” (Lessons for New Believers, Lesson 1, published by Living Stream Ministry)

Isn’t that a helpful story? Now we can only worship God and thank Him, and tell Him that -we like Him, too.